India’s statistics showed that close to 70 per cent of rural households often defecate in the open. Inadequate sanitation costs India the equivalent of 6.4 per cent of its GDP in health care expenses. Each year, an estimated 38 million people suffer from water-borne diseases, and 1.5 million children succumb to diarrhoea. The Tata Trusts took up the challenge to address these issues through the Tata Water Mission.

The Tata Trusts’ Zila Swachh Bharat Prerak (ZSBP) programme is a unique fellowship programme that partners Swachh Bharat Mission, the world’s largest sanitation programme. The flagship programme for the Trusts on sanitation and hygiene, the origin of the ZSBP programme dates back to 2016, when the Trusts and the Ministry of Drinking Water and Sanitation (MDWS) were engaged in a pilot intervention. The Trusts had been working with district administrations in 25 districts across three states to make the regions open defecation-free. Seeing the success outcomes of the work undertaken by the Trusts, the MDWS approached them to replicate the model in 26 states. This led to the incubation of the ZSBP programme.

Under ZSBP, cadres of young professionals were tasked with the role of supporting local administrations to make target districts in rural India open defecation-free (ODF). These preraks or sanitation warriors as they are called, also contribute to initiatives concerning solid and liquid waste management.

The Trusts have deployed around 475 preraks covering almost all districts in 26 states of the country. These preraks work in partnership with the district collectors and bring about grassroot level change. They use behavioural change communication to motivate villages to adopt safe sanitation practices. Stressing the amount spent on medical treatment and the savings that could accrue if open defecation was avoided, the preraks have been successful in creating an environment conducive to change. Through the Jidd Karo Abhiyan, children have been encouraged to demand toilets from their parents and families.  The preraks also monitor the progress of toilet construction by using field data and GPS technology. At one point, the Swachh Bharat Mission had accelerated to the level that there was a toilet being built in the country every second.

Eliminating unsafe practices for sanitation workers in Mumbai, and restoring dignity in their work. 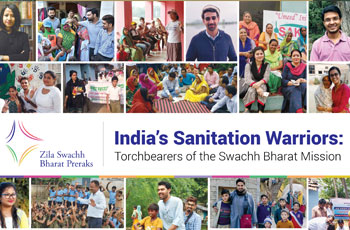