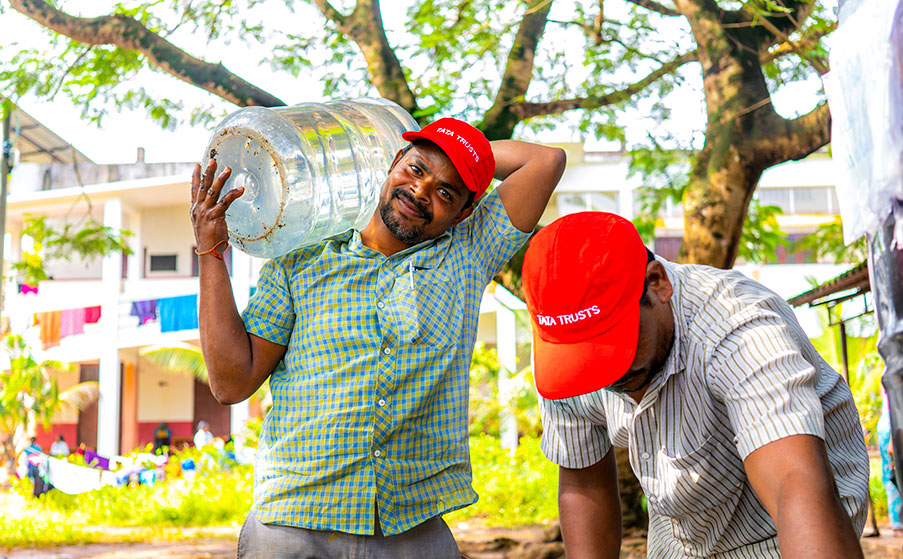 Setting up pathways for long-term rehabilitation

It takes just one devastating act of nature to wreak havoc on entire communities. Earthquakes, cyclones, tsunamis, floods, landslides and forest fires can cause catastrophic damage to life and property.

The work undertaken by the Tata Trusts in providing disaster relief focuses on quick response to such unfortunate natural occurrences, and the provision of essential relief such as safe drinking water, medical aid, health camps, and supply of daily essentials to the affected communities.

In certain instances, once the immediate needs are taken care of, the Trusts engage with the community to set up pathways for long-term rehabilitation — including the focus on livelihoods and infrastructure for education and health services.

In recent times, climate change has manifested itself into a serious threat, triggering a spate of natural disasters worldwide. According to a UN report, India’s economic loss on account of natural disasters occurring between 1998 and 2017 is the fourth-highest in the world, standing at $79.5billion.

The National Disaster Management Authority (NDMA) reveals that more than 58.6 per cent of the Indian land mass is prone to earthquakes, over 40 million hectares stand the risk of floods and river erosion, and almost 5,700km of the 7,516km Indian coastline remains susceptible to cyclones and tsunamis. This is a threat not just to local populations, but also to the socioeconomic fabric of the country.

In times of disaster, what is needed is quick response and essential aid. The Trusts summon their teams at the affected areas, who along with partners, like-minded agencies and the Tata Sustainability Group, work relentlessly in the area to provide the daily essentials — pure water, daily need kits, medicines, tarpaulins, etc. to the affected communities.

Moreover, in few cases, the Tata Trusts’ approach is to partner government bodies, humanitarian agencies, the corporate sector, NGOs and community resources to rebuild livelihood opportunities and essential health and education infrastructure — so as to resume normalcy in affected regions.

Immediate relief: Nepal was hit by major earthquakes, measuring 7.8 and 7.4 on the Richter scale on April 25, 2015 and May 12, 2015 respectively. Many parts of the country were severely affected and there were more than 9,000 casualties and almost 2.8 million people were rendered homeless. The quake also set-off an avalanche on Mount Everest, killing 21 people and marking it as the deadliest day in the history of the mountain. Amongst the 39 districts that were affected, Sindhupalchok was the worst hit.

The Tata Trusts, in partnership with India’s Akshaya Patra  Foundation and Nepal’s Sipradian Sahayata Sanstha (SSS), expeditiously set up a centralised community kitchen in Bhaktapur from where 18,000 meals a day were provided to victims in 17 shelter camps in Bhaktapur and Kathmandu districts. The centralised community kitchen operated for 91 days from June 19, 2015 to September 17, 2015 and served to close to 1.4 million meals to affected communities.

Post-earthquake rehabilitation activities in Nepal: After undertaking immediate relief activities, the Trusts proceeded to undertake a long-term plan focusing on restoration of infrastructure that was destroyed in the disaster. The objectives of the project are to:

Four schools have been reconstructed with a modern layout resistant to earthquakes and designed with disabled-friendly facilities. The April 2015 earthquake had badly damaged the schools, destroying the classrooms, science lab and other facilities at school. The well-furnished, earthquake-resistant school buildings have been handed over to the community.

Flash floods and landslides set off by extreme rainfall over a period of several days in Uttarakhand in June 2013, led to unprecedented damage and destruction in the state. Post the initial relief and recovery stage, Himmotthan Society — the Tata Trusts’ associate organisation in the region — initiated a set of post-disaster initiatives, with support from the Tata Sustainability Group, the Tata Trusts and Star India Pvt Ltd.

Rehabilitation effort: The intent was to restore the livelihoods of 9,049 disaster affected households in 95 villages of Rudraprayag, Uttarkashi, Chamoli and Pithoragarh districts of Uttarakhand. The focus of the programme was on building on-farm as well as off-farm activities to improve the quality of life of impacted and vulnerable communities. The programme worked to enhance the income of small and marginal families, and strengthen producer (community) based institutions to manage micro-enterprises in a sustainable manner.

Highlights of the rehabilitation operation:

A powerful cyclonic storm named Fani hit the coast of Puri district, Odisha on 3rd of May 2019 at around 8.30a.m. It generated storms with wind speeds ranging 200-210kmph and caused widespread damage in Odisha. While Puri district bore the brunt of the calamity, the cyclone affected a total of 14 districts and impacted a population of 1,50,93,513 persons. Though the government of Odisha was able to evacuate over 1.4 million persons into cyclone shelters in time, there was reported casualty of 64 persons and extensive damage to houses, electricity supply, water supply and telecommunication infrastructure.

Responding swiftly to this disaster, the Tata Trusts’ team made a quick assessment of some of the worst-affected areas in Puri and Khurda districts, where cooked food and clean drinking water emerged as the immediate needs of the cyclone-affected population. The cumulative intelligence of some of the recent disaster responses by the Trusts in Kerala, Karnataka and Jammu and Kashmir shaped the operational strategy and delivery on the ground. With their experience and expertise in RO water intervention, the Trusts decided to supply pure RO drinking water in these districts on a war footing.

Within 2 days of the cyclone, the Trusts initiated their water intervention from Bhubaneswar, and subsequently from Puri, with three mobile RO units supported by Tata Projects. Livolink Foundation a Tata Trusts’ associate organisation in Odisha, deployed a strong field team to manage ground operations. The identification of slums and rural pockets was done in collaboration with the Department of Housing and Urban Development, District Administration of Puri; Centre for Youth and Social Development (CYSD), a local NGO; and other partner organisations.

Tata Motors provided three water tankers, with a capacity of 2000 litres each, to further strengthen the distribution process and make delivery accessible to interior pockets.  The RO water intervention, through 5 -16 May 2019, covered 63 villages in Puri and 33 slums in Bhubaneswar, with more than 1, 15,000 litres of pure drinking water supplied to the neediest.

The catastrophic floods in August 2018 caused massive destruction in the state of Kerala, fondly called ‘God’s own country’. Causing immense loss of life and property, this is possibly the biggest tragedy that the state has faced in the recent times. Though all 14 districts of the state bore the brunt of the disaster, Wayanad and Idukki in particular were the most adversely affected. The floods, along with severe landslides in these hilly terrains, led to people losing their houses as well as land. The Tata Group and the Trusts under the leadership of Tata Sustainability Group, deployed full-fledged teams to provide relief and rehabilitation across the affected areas of Kerala.

Click here to watch the film on Kerala flood relief

A brief period of two weeks during July and August 2017 saw unprecedented rains lashing Rajasthan, India’s largest state. Normally characterised by a hot and arid climate, the Sirohi, Pali and Udaipur districts of south Rajasthan received 800mm to 1,200mm of rain, and was soon inundated in massive floods. The deluge not only caused loss to life, property and cattle, but also burst key junctions of the Narmada canal. Roads, livestock and crops were washed away.

With support from Tata group companies, the Tata Trusts, along with their associate organisation Centre for Microfinance (CmF) Jaipur, initiated immediate relief operations involving the relocation of people to safer places and the provision of basic necessities.

The relief activities were operational during July 30 to August 31, 2017.

The same spell of rain and floods that affected Rajasthan in 2017 also devastated parts of Gujarat. Rains in Banaskantha and Patan districts led to flooding in the Banas river. This added to the heavy inflow of flood water from the adjoining districts of South Rajasthan.

In alignment with the approach of having a 'One Tata Response' to the flood relief operations, the Gujarat State Level Disaster Response Forum was activated, and efforts were coordinated at the group level. A core coordination committee with representation from Tata Chemicals, Tata Consultancy Services (TCS), Tata Sustainability Group (TSG) and Tata Trusts was formed to oversee the relief operations. Mobilisation of volunteers across the group companies and that of additional resources was undertaken. One team operated out of Tharad, while the other was located out of the Radhanpur block in Patan district, coordinating the relief operations in the Santalpur block, which had no facilities as yet.

Heavy rains during November and the first week of December 2015 caused widespread flooding and damage in Tamil Nadu, with Chennai city, Cuddalore, Kanchipuram, and Tiruvallur districts being the worst affected. It is estimated that more than 350 people lost their lives and around 10,000 were displaced. The central government declared Chennai a National Disaster Zone.

As part of an immediate response, a four-member team from Tata Trusts visited the flood-affected regions to assess the ground situation; it was decided to support the victims through provision of safe drinking water. 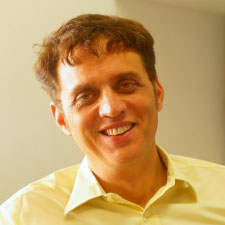 During exigencies, the Tata Trusts, along with their partners and like-minded agencies work relentlessly to provide relief and daily essentials to affected communities 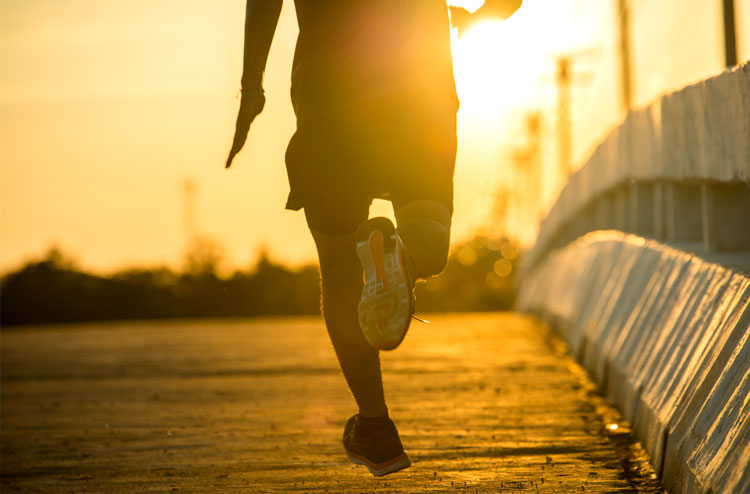 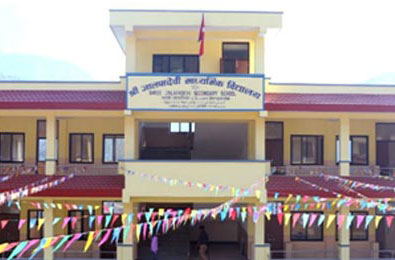